Bathroom Session with The Summer Set

by Kathrine Brock
in Featured, Interviews
0 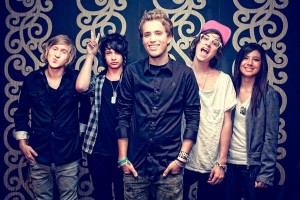 The Summer Set is a pop rock group from Scottsdale, Arizona. Brian Dales (vocals), brothers Stephen (bass) and John Gomez (guitar,piano, BGV), Jess Bowen (drums) and Josh Montgomery (guitar) make up this relatively young, yet successful band. They self-released their first EP “Love the Love You Have” before signing to the Militia Group and releasing two more EPs. The Summer Set then signed to Razor and Tie and put out their first full length “Love Like This” in October of 2009, which was re-released in mid 2010 with a 5-song EP of some of their Taylor Swift covers (live from Bamboozle NJ 2010). They were on the Spring AP Tour and played Bamboozle 2010. The band has been out on the entire Warped Tour run this year and I had the chance to catch up with Josh Montgomery when the tour rolled through Atlanta.

Born in San Antonio, raised in Charleston, currently giving Nashville a run for its money. Live music addict. College football fanatic. I’d rather a guy be able to break down a defense than write me a chorus. That being said, all my friends are in bands. The infield fly rule sucks. I'm a fan of the finer things in life, like bourbon and cheeseburgers. 2005 was a great year for me.